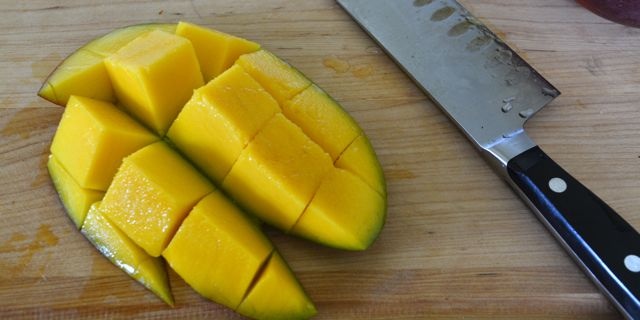 Today is the day!

Two weeks ago a dear, dear woman loaded down her carryon luggage to bring me two mangos from her front yard. I know, you’re thinking – go to the store and buy a mango, you cheapskate! Trust me when I tell you that even the most amazing mango that one can buy in the San Francisco Bay Area pales in comparison to the ones that I grew up with… hence the smuggling.

And today one of them was finally ripe enough to eat. I could barely cut it open fast enough. Okay enough about mangos – you don’t have to feign excitement over my gustatory happiness. 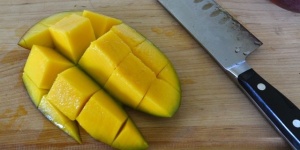 For new vegans and some not-so-new vegans it can be a challenge to consistently integrate enough unprocessed whole foods into what we eat on a daily basis. For that matter it can be challenging for vegetarians, pescatarians, and people with omnivorous diets of various types. Convenience foods are becoming a huge market. There are myriad other reasons that one might have a limited daily relationship with fresh fruits and veggies but I won’t go into it at length here. (Incidentally, food access issues unfortunately exist all over the place. I won’t be taking up this particular barrier & social justice issue here.)

If revamping your dietary habits to include more whole food based stuff (technical term) is a goal, there’s an app that I’ve been trying out that may be of interest to you. It’s been available for a couple of years and is called Pact (formerly GymPact); it is based on an economic idea that individuals are more motivated by retaining money than by earning money.

One of the new ‘pacts’ that’s available is a nutritional one. If, say, you’d like to try to eat an additional  fruit/vegetable a day or five more per week you can make a two-part commitment for 7 days.

1. Set a target number of fruits/veggies to eat (incidentally the system won’t track more than 5/day).

In order to get credit & track what you’ve eaten, launch the app and take a pic of what you’re eating (tough break if you finished it already); it gets approved or voted down by other Pact users based on whether you took a pic of your companion animal and tried to pass them off as kimchi or an apple.

At the end of the week, those who reach their goal are paid out by the users who didn’t do so. Don’t expect a monetary windfall. Last week by meeting my veggie pact, I made $.63. (Payout occurs once you accrue $10 or more. It can be withdrawn using Paypal.) However, I stood to pay out $10 for each missed veggie or fruit. There are additional pacts that you can take part in if so inclined – a gym pact and a food log pact. Each wee one can choose to set a new pact or or set your account to take a break.

If you like the idea of an accountability partner when trying to change habits but don’t want to go it on your own or involve your friends and/or you’re a bit of an app-o-phile like me, you may like Pact. What I enjoy about this option is that it’s possible to make gradual changes in eating habits. As a trainer, a more stepwise approach is what I tend to suggest particuarly when folks are already trying to build new habit with regard to being active. It doesn’t have to be all or nothing and though we may wish it were otherwise, sometimes the ‘best new thing in the world’ doesn’t happen overnight.

For anyone who has used Pact or starts to use it, I’d love to hear about your experience with it.